Packed house at Bose, January 29, 2019 to hear Don Keele speak on CBT arrays. Thanks Don for making the trip and thanks Matt Ruhlen for setting it up! 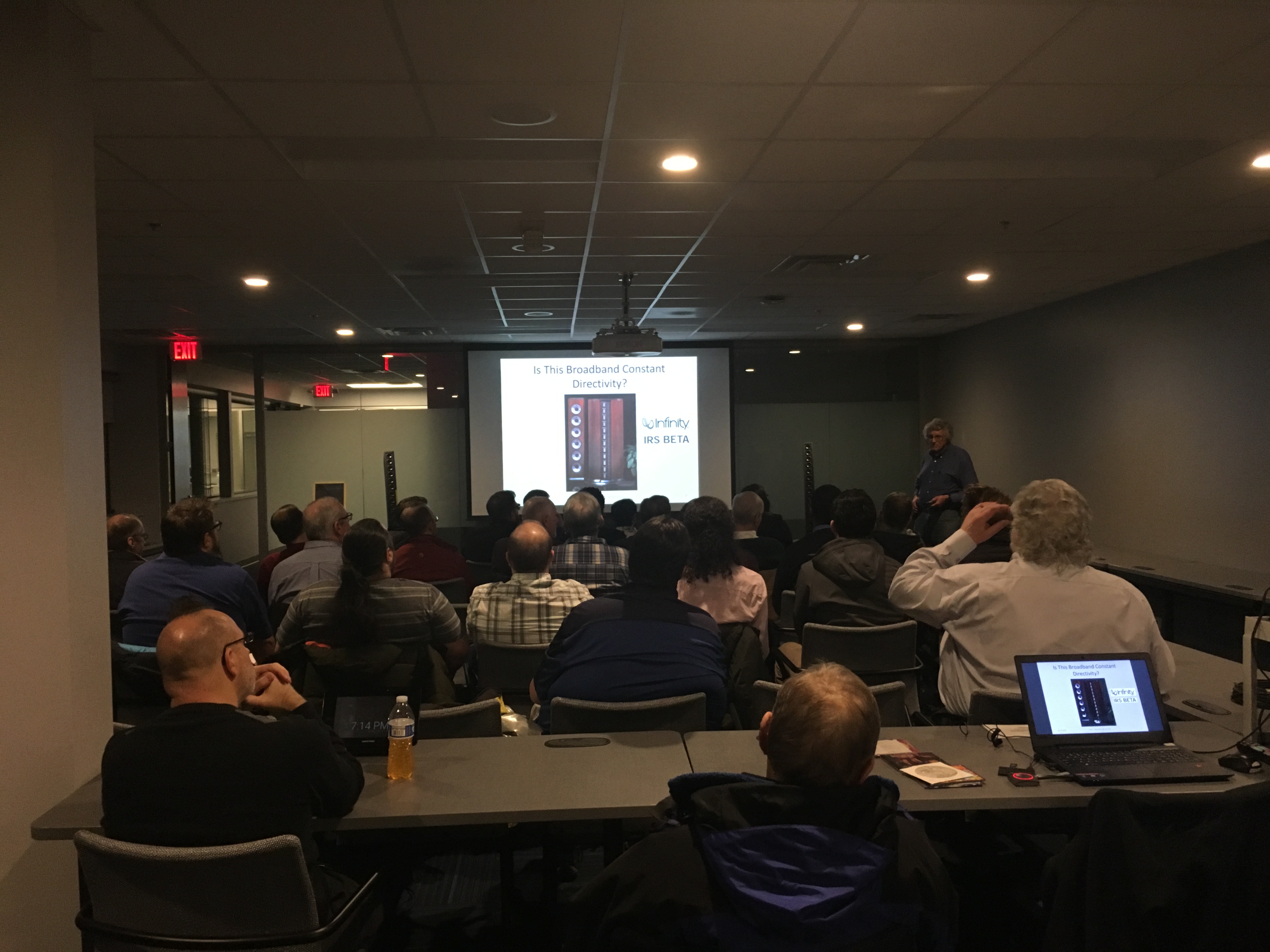 Members, non-members, and students are welcome.

DESCRIPTION:
Come out and hear Don Keele talk about his loudspeaker line arrays based on CBT technology. He has been an ardent advocate and evangelist for the concepts for over twenty years and believes the CBT know-how can vastly improve the sound field uniformity of existing line arrays and conventional loudspeaker systems. Don will discuss the background and history of CBT arrays and will describe and discuss the measurement and simulation results of several CBT line arrays.

For demonstration, Don will describe and play a special anechoic rock drum kit recording that was recorded at a local recording studio that when played over the CBT24’s (with subs) will essentially recreate the live sound of the drum kit in the listening room.

ABOUT DON KEELE:
D.B. (Don) Keele, Jr. has worked for several companies in the area of loudspeaker R&D and measurement technology including Electro-Voice, Klipsch, JBL, Crown, and Harman International. He holds eight patents with topics including "constant-directivity" loudspeaker horns, loudspeaker arrays, and signal processing. He is a fellow of AES. For ten years he wrote for Audio Magazine as a Senior Editor performing loudspeaker reviews.

More recently, he was VP of R&D for loudspeaker manufacturer Audio Artistry and later worked for Harman/Becker Automotive Systems in the advanced technology development group and was a member of the Harman corporate acoustics engineering group working under Floyd Toole. Currently he heads his own consulting company DBK Associates and Labs.

Mr. Keele holds two BS degrees in EE and Physics from California State Polytechnic University and an MSEE degree from Brigham Young University where he minored in acoustics. He has presented and published over 60 technical papers on loudspeaker design and measurement methods and other related topics, among them the paper for which he won the AES Publication Award, "Low-Frequency Loudspeaker Assessment by Nearfield Sound-Pressure Measurement".

His passion for the last twenty years has been to promote the use of CBT (Constant Beamwidth Transducer) loudspeaker technology in the loudspeaker industry. Since 2000, he has authored and presented 17 technical papers on CBT technology.

He is a frequent speaker at AES section meetings and workshops, has chaired several AES technical paper sessions, and is a past member of the AES review board. Mr. Keele is a past member of the AES Board of Governors and is past Vice President, Central Region USA/Canada of the AES. Mr. Keele received the TEF Richard C. Heyser Award in 2001. In 2002, he received a Scientific and Engineering Academy Award from the Academy of Motion Picture Arts and Sciences for work he did on cinema constant-directivity loudspeakers. In 2011 he received the ALMA Beryllium Lifetime Achievement Award for contributions to the loudspeaker industry.